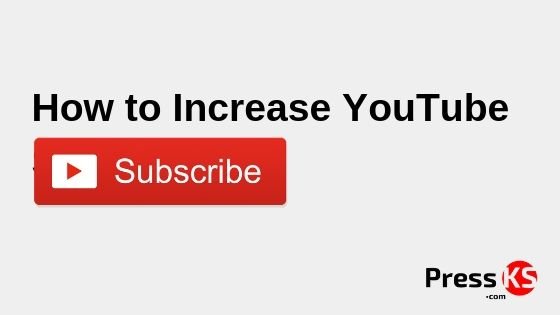 Before embarking on detailing these 7 proven ways to get it, I want to explain why it is interesting to have subscribers on YouTube.

Last week I insisted on the importance of the content of your videos and the metadata associated with each of your video productions to position your videos on YouTube . So I will not talk about it again today. But be very clear that it is the basis of everything.

Without good videos, your bounce rate will skyrocket and you will basically be wasting your time. I will never get tired of repeating the same thing.

It is very important  to show your face on your YouTube channel , especially if you want to get subscribers. Be yourself. People do not look for a super hero. Only ordinary people wanting to share interesting things.

First of all, you have to show some consideration with your audience . If a new visitor arrives on your channel and what you find is YouTube’s default look and feel , you’ll think you’ve made no effort to customize it. It is likely that this visit will not return, because it will get the impression that your channel is not something very worked.

optimize your most prominent videos and the ways in which they appear on your cover . Here your job will be to try to show the best content or at least those that usually generate more answers or more clicks among the people who visit you.

It is important that there is an initial content of 5 or 10 videos , and then you agree to publish at least a couple of videos a month , so that people notice that your  channel is alive . It is another sign of consideration. With this you will see that just like Google does, YouTube will pay more attention if you demonstrate your commitment to this social network by publishing fresh and interesting content on a regular basis.

Encourage participation from your videos and encourage your community

Just as important, try to encourage participation in the conversations from the video itself: ask people to leave you a comment, like the video if they like the content, and remind them that if you become subscribers of your channel you will never miss one of your videos again.

You will have to respond to all comments and also moderate the conversations if necessary. A basic work of moderation and attention, which shows that you take care of people who interact with you on your channel.

Views, comments and good ratings directly impact the ranking of your videos on the YouTube… and Google results page. With which, really, compensates the effort to maintain a community on YouTube and achieve a good participation.

YouTube also allows you to  broadcast on social networks such as Twitter and Facebook  from your own video uploader. It’s something you can activate at once from your own channel.

If you use Facebook you will see that you get good results of reproductions, by the ability of Facebook to remotely stream Facebook videos. Another different thing will be the conversion of these views from Facebook, but if you are looking for reproductions, Facebook is a great ally for the dissemination of your videos.

Also if you wish it is possible to advertise on YouTube , whereby your video will appear as promoted  on the front pages of search results pages.

The other advertising format you have is ads ,that is, advertising above a video when it is playing. I assure you that  click rates are very high in this format .

I recommend that you analyze your statistics because there you will see the traffic that is generated thanks to the searches on YouTube and the videos that give you the best results. It is likely that following this same editorial line you get good results.

You can also identify blogs that spread your videos successfully. An ideal opportunity to propose a more extensive collaboration type guest posting

Another idea you can take to promote your channel is to make video comments on other people’s videos. The caveat is that you do not try only to make promotion, but rather always making valuable contributions to the conversation. Choose videos that are recent and popular, since this way you can send traffic to your own channel.