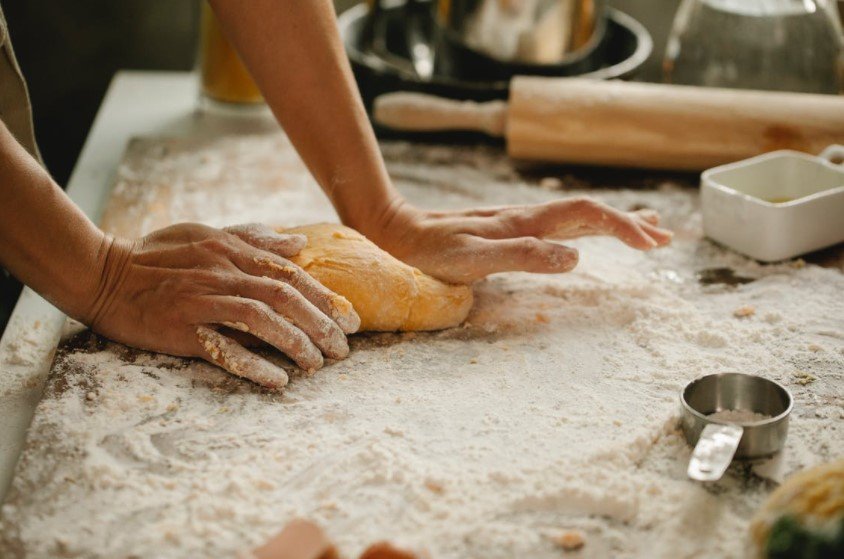 White bread might be a staple of peanut butter and jelly sandwiches, but it’s far from the only kind out there. In fact, thanks to its highly processed flour, it’s actually one of the worst types of bread to eat.

What’s a healthier option for a turkey sub? How can you change up your meals, experience some new flavors and reap the benefits of a better diet at the same time?

Here are just six types of bread for fun and tasty snacks!

Sprouted bread is made from whole grains that have been allowed to partially sprout. These grains are usually wheat, barley, millet or a legume like soybeans or lentils.

Sprouted bread has a dense, crunchy texture, especially on the crust where small sprouts and seeds are dotted like nuts. It’ll be great for any recipe that needs a bite.

Another noteworthy thing about sprouted bread is that it’s one of the healthiest types to buy. It hasn’t been stripped of its nutrient-bearing grains like white and even certain types of wheat. Some studies suggest that sprouted bread has three times the amount of nutrients as others, so it’s definitely worth buying a loaf and checking it out.

Brioche is made with hearty amounts of butter and eggs, which is how it gets its rich taste and picture-perfect look.

Since it’s been around since the 1400s, there are many ways to enjoy brioche. Chefs from all over the world have experimented with different ingredients and infusions. From sweet, pastry-like brioches to savory brioches stuffed with meats and gravies, you’ll never run out of new ways to eat it!

Sourdough bread gets its name from the fermentation process. It’s made with wild yeast and naturally-occurring bacteria that rise into a tangy, chewy loaf.

In addition to its signature flavor, sourdough bread is great for digestive health. It has probiotic properties much like yogurt, kimchi, sauerkraut and other fermented foods.

There are many ways to enjoy sourdough, including in soups, salads, sandwiches and more. If any of your dishes could use a tang, sourdough is the way to go.

Rye bread is famous for its dark brown color, but this isn’t entirely accurate; it can be both light and dark depending on its flour type. Some folks even add coloring agents to their rye to give it the “traditional” look.

The taste of rye bread is strong and earthy. It dates back to the Middle Ages when it was easier to grow rye grain than other types, making the bread abundant among both the higher and lower classes.

Rye bread can be used in many different recipes. It can also be made or purchased with varying bases like sourdough, giving it an even more unique taste.

If you don’t want to choose between light and dark rye, consider opting for marble rye, which has both types rolled together in an aesthetically pleasing way.

Pita bread is popular in the Mediterranean and the Middle East. It often functions like a tortilla with meats and veggies wrapped, tucked or stuffed inside, but it can also be used as a flatbread base for sandwiches or a dipping bread for things like hummus. It can even be cut and baked into pita chips!

Pita is made by cooking its dough at high temperatures until its water turns into steam, puffing it up and creating an air pocket.

If you’re tired of boring old white bread, you might enjoy experimenting with pita. It has the same versatility in terms of recipe potential, but it’ll offer new flavors and textures to shake things up.

Usually made with leavening agents like baking powder rather than the traditional yeast, dessert bread is a sweet treat that’s almost more of a cake than a bread. It has a dense, moist texture, and it’s often topped with nuts, stuffed with berries or drizzled with honey for an even sweeter experience.

Here are a few common types of dessert bread:

You’ll want to be careful with dessert bread since its additives can quickly tip it into the category of “unhealthy.” While reaching for banana or zucchini bread might be better than reaching for a candy bar, it’s still not something that you should have on a regular basis. Consider it an indulgence rather than an everyday thing.

These are just a few alternatives to white bread that are healthier, fluffier, tastier and better for a diet or a nutritious lifestyle. For even more options, keep your eyes peeled in the bread aisle, or visit a local bakery to see what creations they’ve kneaded up for customers! If you are going through the effort to buy a toaster, put some delicious bread in it!