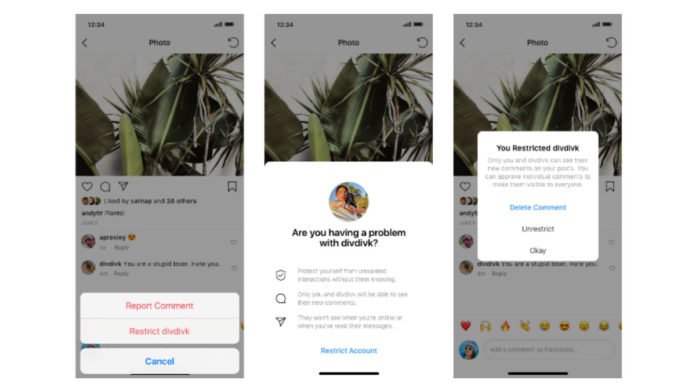 How to Restrict Instagram Followers and How to Use It?

Instagram has launched a new feature “RESTRICT”, as nowadays Instagram has become a forum for bullies, trolls and being blemished by the haters with their damnable comments and memes.

Recent surveys publicized that teens are being bullied and harassed by strangers, to suppress all these stuff, Instagram came out with this feature.

This feature enables users to restrict people in spite of blocking. Now, for an individual, it is very hard to block someone, when they are part of their social circle. So you can use this RESTRICT” feature. It is very similar to the mute feature on Twitter.

Strangers can comment on your post, tag you, the message you, but you won’t be notified by their activity and everything will be hidden everywhere on Instagram. Isn’t this a cool feature? Like you can mute them everywhere.

Things that will be improved after you restrict:

HOW TO USE THIS “RESTRICT” FEATURE

Being in a Social platform is now becoming safer than before and that is really great!!!!!

ABOUT US
pressks is your news, entertainment, music fashion website. We provide you with the latest breaking news and videos straight from the entertainment industry.
Contact us: pressks.com@gmail.com
FOLLOW US
© Copyright 2021 PressKS All Rights Reserved.
error: Content is protected !!