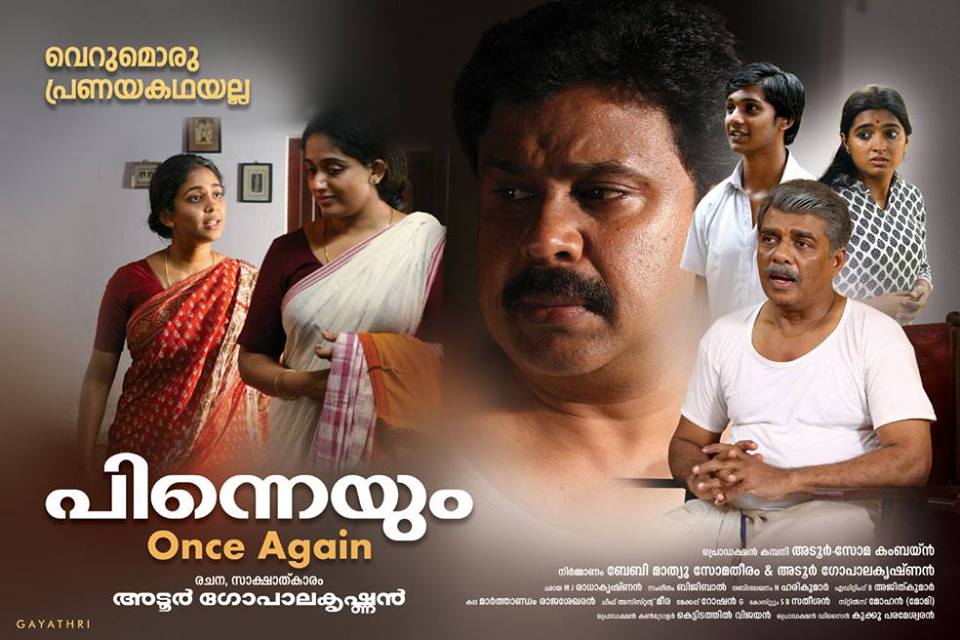 Pinneyum is a movie directed by the maestro Adoor Gopalakrishnan after a really long gap. Naturally, it had drawn lots of expectations, especially after the cast was announced which included the evergreen pair Dileep and Kavya Madhavan. Needless to say that the trio had kept the expectation bar really high as a combination as well as in their individual spaces. But we are not quite sure whether they were successful in keeping up the expectations as the movie doesn’t let the audience carry anything when they are out of the theatres other than lots of questions in mind.

The plot can be described in very few words as the journey of an educated yet unemployed man who was dependant on his wife Devi’s(played by Kavya) earnings, facing humility from the society and gradually finds a job in the Middle East.

Even though the storyline is not the untouched one and has been experimenting with in different ways in a Malayalam movie, the audience will definitely expect that Adoor touch on the plot will make it beautifully different. But unfortunately, all we can see is the downhill of the movie as it proceeds. Once the hero, Purushothaman Nair reaches the Middle East, greed takes over him and some unfortunate things happen.

The movie is taken in that typical Adoor pace which makes the audience feel it as all the more melodramatic. A clumsy screenplay and some of them the play dialogues made it worse. Dileep and Kavya did a usual decent job but even that couldn’t save the movie from drowning. Needless to say that the supporting cast of the movie, veteran actors Vijaya Raghavan, Nedumudi Venu and Indrans did their parts extremely well.

Bijipal, music score needs special applause which really blended to the situations and added to the tense sequences in the movie, especially towards the climax.